In other countries they also prepare Shepherd’s Pie, such as Peru and Argentina, with only a slight variation in some ingredients. 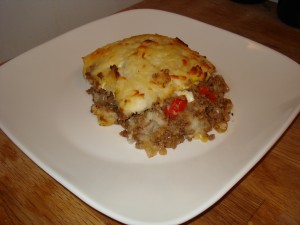 Make the mashed potatoes.
Wash the potatoes and put them in a pot of cold water with a bit of salt, and let boil.
When they’re done, take them out and let them cool a bit.
Peel the potatoes, and mash them, adding milk, butter and salt. They should be thick.

Make the meat mixture.
Peel and chop up the onion into little squares.
Wash and cut the red pepper into small pieces.
Peel and chop up the garlic cloves.
Heat a pan, and add the olive oil.
Fry the onion with the red pepper.
After a bit, you add the garlic and ground meat.
Then you can add salt, pepper, ground cumins, oregano, chili pepper, paprika, depending on how much you want.
Mix it all well, so that meat is completely cooked.
After the meat is cooked, add red wine, mix it well and after one minute remove it from the stove.

Add a bit of butter to the bottom of the glass or ceramic container you are going to use to bake in.
In the bowl you use to cook the mixture, make sure you leave some space at the top.
Soak the raisins in warm water for 5 minutes.
Put a layer of mashed potatoes using about half of the potatoes you had prepared.
Add a layer of the prepared meat mixture.
Add black olives, the raisins, and the hardboiled eggs, cut into pieces.
Add a final layer of mashed potatoes.
Finally add the grated mozarella cheese over everything.

Bake approximately 30 minutes or until it looks golden on top.

In this preparation instead of grated cheese, you can do bread crumbs.
Instead of black olives, it is also tasty with green olives.
The secret is to add lots of ground cumin, it gives a good flavor to this and many other Chilean recipes.
You can prepare the mashed potatoes with the instant mix kind, but they will never be as good as your own homemade mashed potatoes. 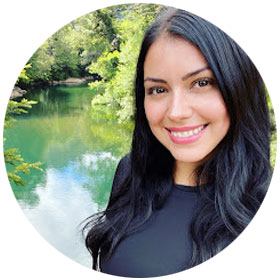